(In writing this upcoming series of posts, I do not intend to give the impression of being educated on current immigration laws or topics…as a matter of fact, good friends who do this full time are having a hard time keeping current. As missionaries in Central America, one of the regions sending the largest number of youth to seek better futures across the northern border, we wanted to weigh in on the discussion and help encourage a broader picture of the situation…south of the border) 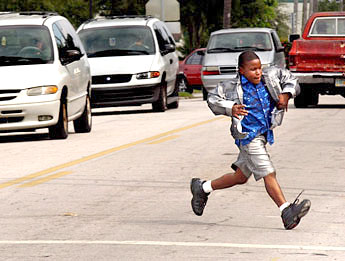 Johnny (Juanito) woke up like any other day. The sound of his mother asking, pleading and finally insisting that he get out of bed. This started early now that Johnny started attending the new school, as they didn’t have a vehicle, and the bus didn’t pass by their house, so they needed to walk. Johnny was still too young to walk with his friends to school, or so his mother said. Breakfast was basically the same every day, one egg, a spot of beans, some type of fresh fruit, either a half of an orange or an apple, and always…two tortillas.

As they walked out the door, almost as a second thought…Johnny’s mom grabbed his hat, “They will see you better.” Johnny never had been very comfortable with this school. Even after almost a year, he still seemed different, like an outsider. He was as smart, or smarter than many of the other kids, but he still struggled to keep up, to fit in at recess, to laugh at the right time with their jokes, to pay attention in class, to get the right answers on the tests…that seemed to come all to often.

He made this walk every day, and as every day, whenever he would complain, his mom assured him how much better this school was and why it was important to make the hour walk each day instead of going to the school that he used to, in their neighborhood.

The school in their neighborhood was different. Johnny’s 5 cousins went there. They would eat and laugh at the breaks, exchange sandwiches, joke about the crazy antics of their uncle and tell stories that only they knew the context of. They could leave class to supposedly go to the bathroom, and pass fifteen minutes in the halls talking until one of the teachers caught on and sternly called him back to the math, or language, or art class…whatever it happened to be. As with most memories, the sense of nostalgia made the memories much more vivid and even more exaggerated with each passing day, now that he was at “the new school.”

Johnny’s mom squeezed him tight, startling him out of this nostalgic day dream. She said the same things every day, “Mijo, you are the best gift God has given me…and I will always work hard to give you my best. Now do your very best at school today. Te amo mi Juanito.” She kissed him and sent him across the street to the school, now in plain view one block away. Johnny looked to the left and crossed to the middle divider, which separated the traffic from the other direction. There was a crosswalk at the next intersection about a half mile to the right, but most never crossed there, as it was way out of the way and the school was just to the left. Two kids had just run across and Johnny set off.

Just as he reached the safe ground of the middle divider, a five-foot wide finger of grass with concrete curbs on either side, he now turned his gaze to the right where the oncoming traffic now switched. Just then, a puff of wind caught his baseball cap and blew it into the street behind. Johnny instinctively spun to his right and took a step back.

It happened in a split second, which Johnny’s mom would relive in slow motion, over and over again. A car was already in the lane and surprisingly close to the middle divider. As Johnny spun to his right to catch the cap, the car clipped his right leg and shoulder, the impact left a sickening sound, a thump of soft clothing and a crack of his leg and arm, then an instantaneous second crack as he bounced off the windshield and over the car. The driver had tried to slow, but hadn’t had time to stop…and in a split second decision, sped up and veered two lanes to the right to disappear into the next street corner. It was a white car, a Ford, said one eyewitness later, another said it was a Mercury. The license plate, identity nor actual make and model were never discovered.

The next two hours were a blur for Johnny’s mom. Two cars in either direction stopped, helping slow the morning traffic, and in a sense creating a protective space for the motionless 12 year old on the street, and create enough space for her to safely cross into the median. She collapsed over him sobbing, crying “Mijo, mijo, no mueras!!!” Within two minutes a state trooper had arrived, officially taking control of the situation from the hysterical mother and the dazed onlookers now gathering on both sides of the street. He called in the situation on his radio, requesting an ambulance immediately, tagging on his cocksure assessment of the situation, not caring who overheard, “Nother one of those ignorant jaywalking hooligans…if I said it once, I said it a thosan times…gotta put that gosh darn fence up all along this blasted highway.”

It was Monday morning and the trooper had not finished his morning coffee and was in rare mood. He proceeded to explain the foolhardiness to Johnny’s mom about sending her son across the street. She nodded respectfully in tears, but didn’t hear anything he said as the ambulance arrived and began to prepare Johnny’s still unconscious body rapidly for the trip. The troopers lecture was cut short by their arrival. Johnny’s mom joined him in the ambulance as they asked her for her insurance card… “It must be at home,” she sheepishly lied. As the ambulance pulled away, the onlookers one by one returned to their day and the trooper closed his report book, opened his car door and took a drink of his coffee on the vehicle roof and cringed…it was ice cold.

In one hour the scene would be gone. In 24 hours it would be mentioned on page 13 of the local paper. In one week, Johnny’s seat would still be empty in the classroom. In a year, only Johnny’s mom would remember the horror of those two seconds that changed her life, and Johnny’s forever.

You may have gathered by this point, in this fictitious tale, this parable, that the schools are not really schools – they are countries, once one united territory, but now separated with geopolitical lines…solid lines on google maps. And the street is not a highway, it is a border, maybe constituted by the Rio Grande, or an uninhabitable desert. And the car driving by is a “coyote” or hotel or house operator, human trafficker, or any host of individuals who get their cut of the nearly $6,000 it costs for someone to make the trip from Central America to the United States.

The big question everyone wants answered, who is to blame?

Which leads us to the real question. What can be done to keep more Johnnys from the same fate?

But it is against the law…!!

…we will look at that in the next post.

3 thoughts on “Parable of an Immigrant, Part 1”