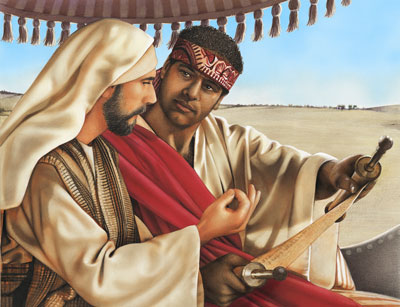 As we shared in the last post, New Year – New Church – New Promises, we are launching a New church in San Salvador…and this has stirred in me the evident reality that we need to be led of the Lord and actively seeking those who need Him.  This is not a new reality, but often we get busy with life and forget this very important reality…people are lost without Jesus, and if they don’t find Him before the grave, eternally lost.  Because of this reality, one of my favorite stories from the Book of Acts, in Chapter 8 spoke much to me recently and I want to pass that on to you.
To refresh your memory, Stephen is killed, becoming the first martyr of the early church… murdered is an accurate word to use here, and it was approved by the pre-converted Saul of Tarsus.  So those multitudes who had come to Jesus are being arrested, beaten, great persecution breaks out…and they run from Jerusalem.  Philip ends up in Samaria, and does what he has been doing, praying for the sick, chasing demons away and preaching.  This guy leads a one-man revival.  But the Lord isn’t done yet, the Holy Spirit sends him down from this massive revival, to find one man, one man who tradition has said, brings the Gospel to Ethiopia, which at that time was the end of the known world.  Then when he is done, the Lord translates him (Star Trek, “beam me up Scotty” style) to another town where he continues to preach and eventually settles down in Caesarea, has 4 prophetess daughters and establishes another ministry.  We find him still here 20 years later in Acts 21:8.
If you are like me, you would love to have a run like this, but also, find myself struggling to know when, how, where to share my faith.  Here are some observations that I found a really great launching point to pray for open doors to share my faith, like Philip.
What makes an Evangelist? Acts 8
1) Subject to travel by necessity…in this case persecution, but could be work travel, business, etc.  Not typically a person who stays indoors, with little interaction with people, vv. 4-5.  Maybe we go out to walk the dog, the donut shop, having a routine where we are OUT to be with people.
2) Empowered with the Holy Spirit – sends demons out on their way & preaches – this caused the people to hear the message vv. 7-8, even practitioners of evil (a sorcerer) see and listen, v. 13.  I need to be spending regular time with Jesus to keep my cup full!
3) He is not necessarily one of the “big guns” (the apostles) as Peter & John are sent down to assist, vv. 14-15, but he, working alone led the revival.  Not afraid to work alone, however not too proud to call in replacements when needed.  I don’t need a ministry title to share Jesus with people.
4) Directed specifically by the Holy Spirit, even angels, vv. 26-29, to the point that he can be translated immediately by the Lord!! vv. 39-40  I set in my heart now, Lord, where you send me I will go, I will say “yes” when you nudge me towards someone.
5) Is used by the Lord to lead significant people of influence to the Lord,…tradition says that this Ethiopian man returned and converted multitudes in Ethiopia…the Gospel went to “the uttermost parts of the earth (Acts 1:8)” (at least the known world at that time).  vv. 27-28 & vv. 35-36.  I will pray for the Lord to send me to people who are ready, and can influence others.