I wanted to pass on a Thanksgiving bit that I received from a blog that I follow by Pastor James Emery White  called “Thankful for the Fleas.”  May your Thanksgiving weekend be blessed, whether enjoying a day off from work, back to work, or enjoying a day of shopping with a few thousand of your closest friends…let’s be thankful for EVERYTHING that the Lord brings our way. 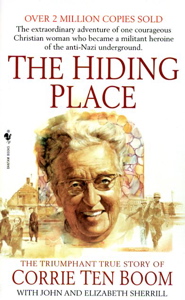 The barracks where Corrie ten Boom and her sister, Betsy, were kept in the Nazi concentration camp, Ravensbruck, were terribly overcrowded and flea-infested.

They had been able to miraculously smuggle a Bible into the camp, and in that Bible they had read that in all things they were to give thanks and that God can use anything for good.

Betsy decided that this meant thanking God for the fleas.

This was too much for Corrie, who said she could do no such thing. Betsy insisted, so Corrie gave in and prayed to God, thanking Him even for the fleas.

Over the next several months a wonderful, but curious, thing happened: They found that the guards never entered their barracks.

This meant that the women were not assaulted.

It also meant that they were able to do the unthinkable, which was to hold open Bible studies and prayer meetings in the heart of a Nazi concentration camp.

Through this, countless numbers of women came to faith in Christ.

Only at the end did they discover why the guards had left them alone and would not enter into their barracks:

It was because of the fleas.

This Thanksgiving, give thanks to God for every good and perfect gift (James 1:17), but also thank Him for how He will use all things for good in the lives of those who trust Him (Romans 8:28).

In this time of declining home values and rising unemployment, in a time when many are facing physical and emotional challenges, there can be little doubt that such a trusting prayer of gratitude will be challenging to consider.

But when you feel that challenge, take a moment and remember the fleas of Ravensbruck.